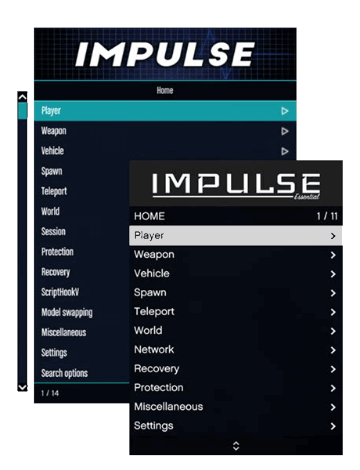 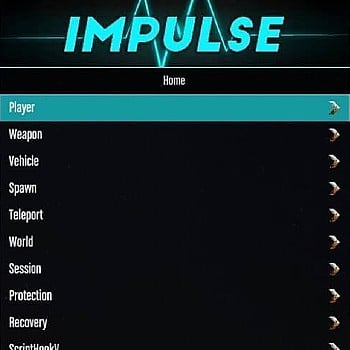 Mod menus are a great way to make your gaming experience better. One of the best mods to have for your games is the Impulse mod menu. This tool lets you make changes to GTA 5 and explore additional features of the game that the developer didn’t previously include.

Impulse menu has numerous features that will help you play the game better and add to the already impressive gameplay on GTA5. Impulse mod menu is designed to deliver the best user experience owing to its simple user interface and simplicity to navigate through.

This feature allows you to change characters in the game. You can thus include new characters to replace those removed, and this will make the game interesting. One of these options is swapping the cops in the game with rifle-toting chicken as they chase you through the game map.

Weather plays a key role in your experience as you play GTA5. For example, while driving through the highway in a storm, your visibility will reduce, and you are likely to crash. The impulse mod menu allows you to change the weather to your preferred conditions. You can also change the time to enable quests to appear faster.

You can now add new vehicles to GTA5 whenever you want to, thanks to the Impulse mod menu. It will alter the vehicle file on the game and make new additions to your customized rides. This will add a personal touch to the game, and you can enjoy it more as you drive your designed vehicles.

This Impulse mod menu feature will give you the ultimate control over the participants in online matches. If you have a player who doesn’t play by the rules as you go on online missions, you can now add them to the session overseer list. It will make their gameplay poor, and they will encounter numerous crashes as they navigate through the map. In addition, you now have control over other players.

This is one of the best features on the Impulse mod menu, as it gives you ultimate control over your gameplay. When activated, your player can sustain attacks without getting injured.

You can also teleport from one point on the map to another, and your weapons inventory will always be full. It ensures you are always prepared for any eventuality in the game and that nothing can take you down as you play.

Can your account get banned for using this mod menu?

This is a concern for many gamers owing to the strict anti-cheat software deployed by RockStar to curb cheating in GTA 5. However, when using the Impulse mod menu in the game, you don’t have to worry about that as you can play undetected. It lets you make all the available modifications as you play online multiplayer games and offline game modes easily.

You can thus get the best performance from this game mod and remain safe. The impulse mod menu has all the best features a gamer would need.